For an English girl in America it’s always exciting when I find myself a real lamb doner kebab, and not a gyro or ‘kabob’ meat on a stick.

I’m talking about the big rotating slab of meat that’s oozing with grease and god knows what; the meat that you mostly choose to eat after a night of drinking before you drag yourself back to your home for bed. The kind of meat that changes your life and leaves an imprint on your stomach in either a good, or a bad, way.

My first memories of a doner kebab are fond ones. I can’t remember how old I was exactly but I think I must have been under 10 years old. It was a Friday, and school was out. Back then we lived in a small town in the East Riding Of Yorkshire, in England, called Hedon. When I knew it was ‘kebab week’ I’d sit in class staring out the window on a Friday afternoon, longing for that doner meat that I loved so much but knew I couldn’t have all the time. Not every week, but at least once or twice a month, my Mum would end up taking me to our local kebab shop which was called ‘Cazba’ and every single time I’d ask for a kids portion of doner meat and chips (fries). My sauce of choice as a youngster was ‘pink sauce’ and the owners got used to me calling it pink sauce so much that it kind of stuck. Later in life I’d learn that the ‘pink’ sauce was actually just seafood sauce and it seemed to loose its glimmer of mystery, which lead me to the path I still walk to this very day – garlic mayo street – ha.

I still remember to this day one rainy night I walked home next to my Mum, holding my doner kebab box like a baby in my little hands, and I remember the feeling of electricity I felt in my body because I knew I was going to be eating a kebab soon.

My Mum told me every single time how bad they where for me, which is why we didn’t have them a lot, and now I’m older I understand completely what she meant, but I’ll be forever thankful that she let me have them once in a while as a treat.

Upon arriving home I’d sit myself on the living room floor, the wood fire burning to my right with the angel that lost its wing on the mantel (thanks to my brothers and a secret house party that turned out to not be such a secret) and I’d tune in to Cartoon Network. Like the kebab, Cartoon Network was also limited so that we didn’t turn into couch potatoes, and to have them both at the same time felt like Christmas morning.

There I’d spend the evening, picking up a chip (French fry) and wrapping it in a string of doner meat like a burrito, before dunking the whole thing into pink (seafood) sauce. Those memories of Friday night kebabs have stayed with me for all of my life.

In my late teens I’d eat them on and off randomly, but when alcohol was introduced at 18 I’d choose a greasy doner kebab to end most nights, so I guess the kebabs have stayed with me ever since my childhood.

So here I was, a 26 year old in Boston, not looking for a kebab after long since giving up on America ever having anything close to the European kind we know and love, when I happened to stumble upon Boston Kebab house. 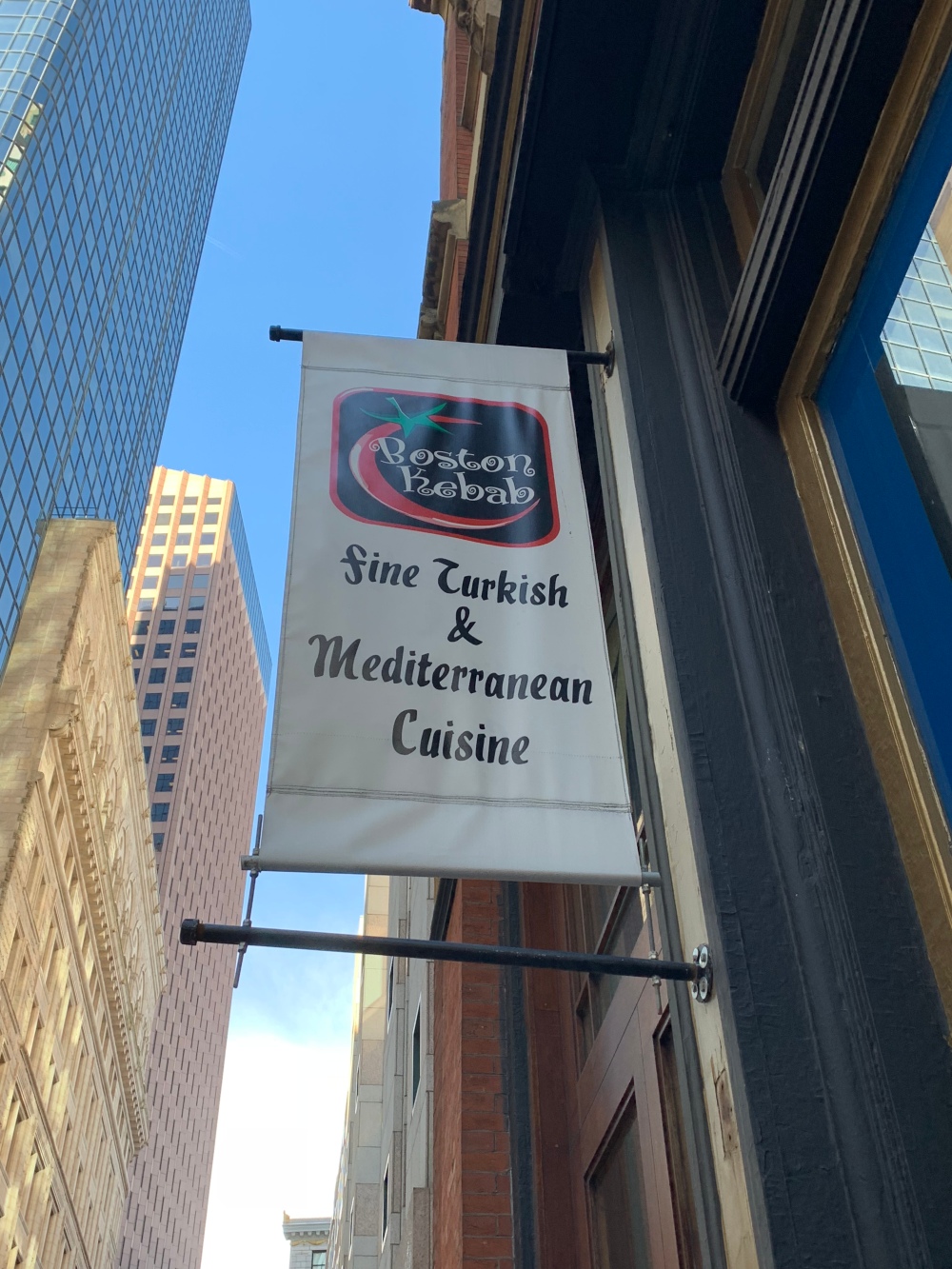 I was skeptical. In my past experience I’ve seen the word ‘kebab’ and found myself eating a gyro in misery that resembled doner kebab in no way whatsoever.

Sometimes I’d even received a lamb kabob stick which – although yummy – is not a doner.

I peered through the window and saw the big slab of meat turning upon a rotating spit, and instantly my arm hair stood on end.

My eyes where wide; that young kebab loving kid was still in there somewhere looking out with me, and together we stepped inside.

The upstairs kebab area worked on a line. First you’d pick the base and sides, and then the meat, and the finishing touches would be added.

I got the doner kebab plate, and the guy told me I could choose from four sides; they had all kinds of crazy things going on like tortellini and macaroni salad that I would never think to put with a kebab. It wasn’t exactly what I was used to, but I’m thankful that the guy understood me when I asked for 1 side and 1 side only – French fries.

At first he was confused, but after explaining my usually doner meat, French fries, and garlic sauce set up he looked at me puzzled before making the plate.

I wanted to reassure him that I wasn’t crazy, and that in fact the plate would be a genius creation that Europeans know only too well.

I watched with eager eyes as they plated it up; my first glimpse of the doner meat was satisfactory; I saw the shaving of the rotisserie, and the tongs used to transport those ribbons of delicious meat over to my pile of French fries.

I was in sheer admiration as the garlic sauce was blanketed generously over the whole mountain of food, and happily I walked over to the counter to pay as fast as possible.

With my kebab in hand I walked downstairs to the larger dining room to find a comfy spot in order to devour.

I felt as though I was sat in a basement, which I guess I technically was, and I found myself feeling almost lonely without my husbands presence since he had been feeling under the weather and didn’t want to leave the room, but sitting away from the crowd I got my first look at my doner meat and chips.

It looked the part, it smelt the part, but did it taste the part?

I’ve long given up my childhood habit of wrapping the doner meat around the fries before dipping them into sauce; I now use a fork to try and at least be civil when out in public.

My fork pierced the garlic sauce, and pushed through into a ribbon of doner meat, before finishing its journey with the crunch of a couple French fries.

I lifted it away from the rest of the dish, more of a bundle than a fork, and eyed the greasy meat with untrusting eyes. I hoped it would do the doner justice.

The first bite was almost like a hug from home.

The garlic sauce seemed to be a mix between garlic mayo and tzatziki sauce and it worked very well.

The doner meat was a mix of lamb and beef but I could tell that lamb was the more dominant ingredient in the mix.

At home I’m used to only lamb in my doner meat, or at least I hope, but it was so close to the original that I could barely detect the beef flavors included in the mix and I was ok with it.

The fries where greasy and perfect; they soaked up not only the garlic sauce, but the beautiful lamb juices that dripped off of the meat and down into the depths.

It was like a slice of home right here on American soil, and although I know that doner kebabs do not originate in England in any way at all, but in fact it’s said that they come from Turkey (queue the political encore of the fight of Greek and Turkey origin) but I’d like to think that with a lot of different cultures in my homeland that we have been lucky enough to have the real deal right there on British soil.

Most people eat their kebabs in a wrap, but I find that a wrap and French fries are too much of a starch party for me, and my all time favorite way is to just simply pile Doner meat on top of the fries and add a lather of garlic sauce.

The mix of the Doner meat – with its beautiful lamb taste – the punch of the garlic tzatziki sauce, and the balancing starch of the fries to soak it all up was absolute heaven.

I couldn’t stop eating it.

Myself and my inner child where at ease, and although it wasn’t a Cazbar kebab from my memories it was definitely something special for a kebab house across the big ol’ pond.

My views had been completely flipped; I believed for a long time that America was missing out on a food so popular in not only my home country but across most of Europe, and I couldn’t understand why it hadn’t caught on yet. After finding Boston’s kebab house I saw a light at the end of the tunnel, a glimmer of hope, and a longing for more kebab joints to open up across this country that I now call home.

Thanks to the Boston kebab house I now have a new found love for doner kebabs in the states, and I have hope that my path will cross another legit kebab shop soon.

What’s your favorite way to eat a Doner kebab? Send me pictures and leave comments on this page. Alternatively head over to Facebook, Twitter and Instagram @ AHangryWife to tell me what floats your boat.