Just when we thought we’d escaped from the snowy days of Chicago, we woke up and opened the bedroom curtain only to see a snow storm commencing in Boston – of course!

Unwilling to go too far in the snow, and holding off as long as we could before food was absolutely necessary, we wrapped up in layers to visit New Dong Khanh Restaurant in Boston’s Chinatown.

My husband was craving some good Vietnamese pho, and I had my eyes on one particular dish called the ‘Mi Viet Tiem’ which translated to Duck and egg noodle soup.

Of course I had spent the afternoon scanning through pictures and reading about this little family run restaurant, and now had my entire heart set on this one dish that looked absolutely phenomenal.

With my fingers crossed my husband and I approached New Dong Khanh and stepped in out of the blustering snow.

The inside wasn’t anything fancy.

One big open room filled with tables and chairs spread out in front of us, and in order to get away from the cold opening door we picked the left side of the restaurant to make ourselves comfortable.

The smell was absolutely mouthwatering, and although I already knew the dish I was going to order, I flicked through the menu and got a few pictures for you to feast your eyes upon. 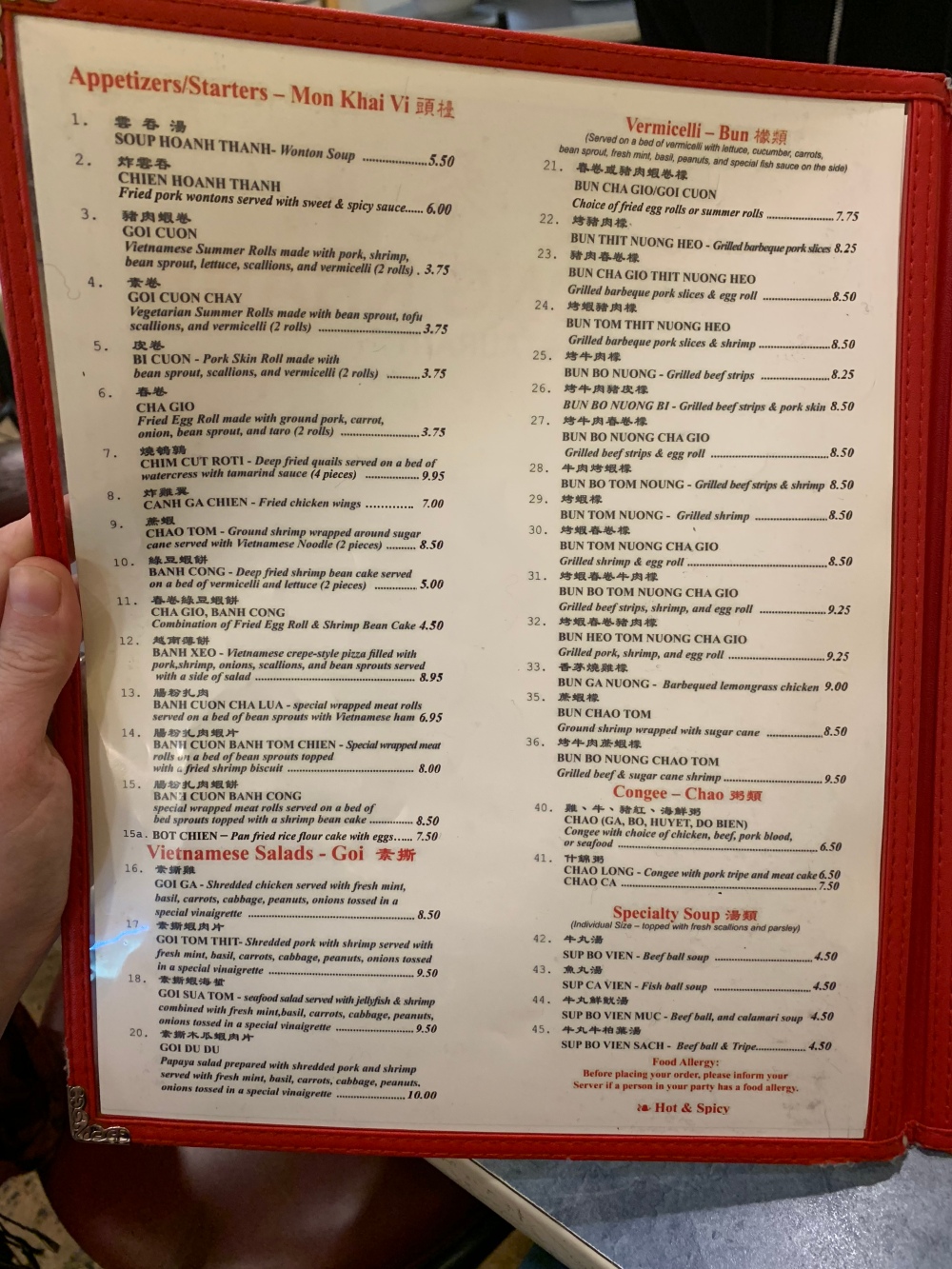 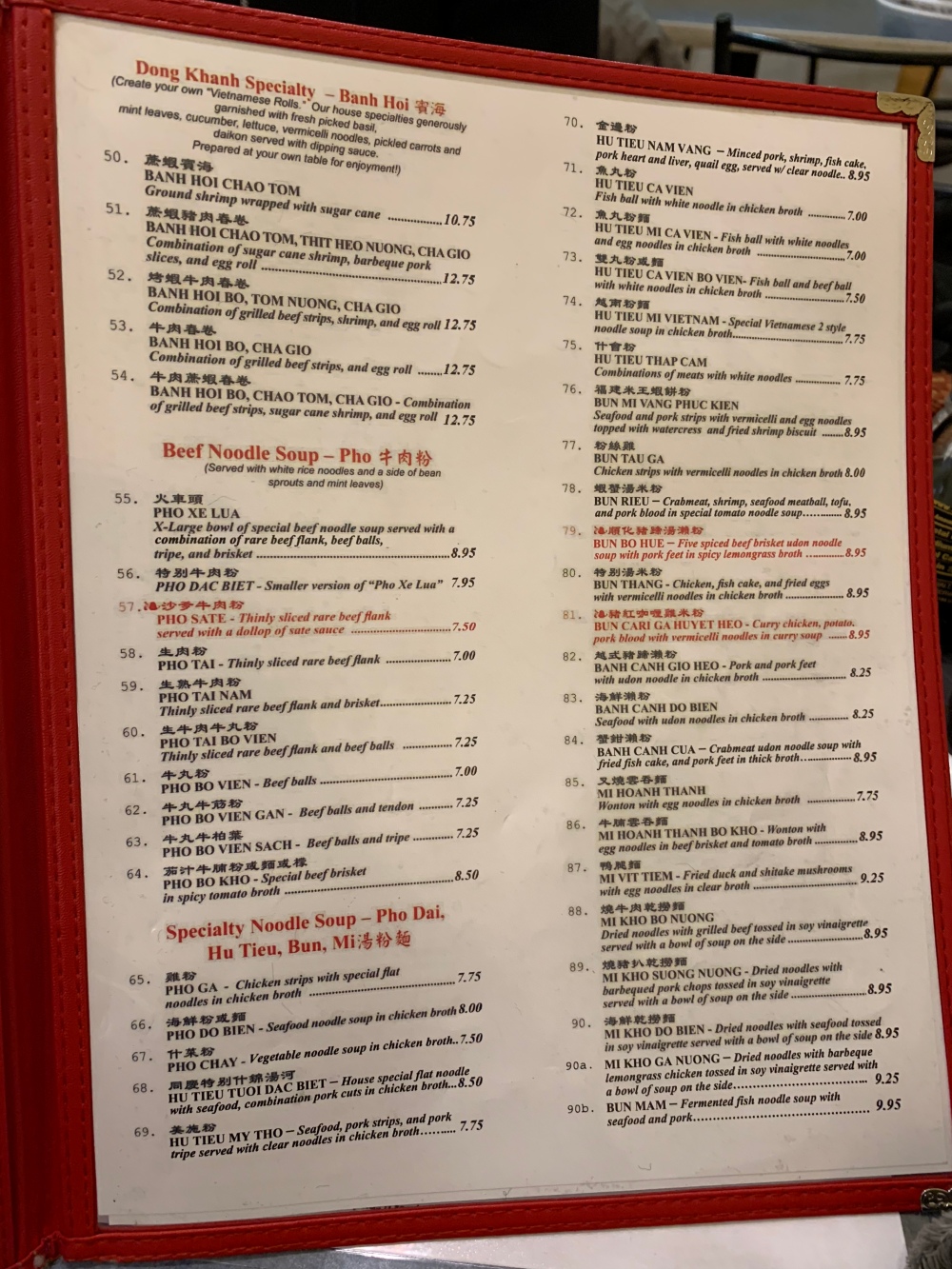 The service was a little distant, and the older gentleman would later spill my husbands pho broth when he pushed the bowl towards him at the table – splashing scolding broth onto my husbands hand; I couldn’t tell if he was angry at us, or just didn’t realize what he’d done when he walked away without saying a word.

I looked past the incident and reflected on how this would be the first time in a couple of years that I hadn’t ordered Pho Tai at a restaurant when it was available on the menu… I looked forward to new delicious adventures.

No matter how many times I eat duck I always fall in love – especially with crispy fried duck – it is truly my weakness, and as soon as my bowl touched down on the table I knew I’d made the right decision. 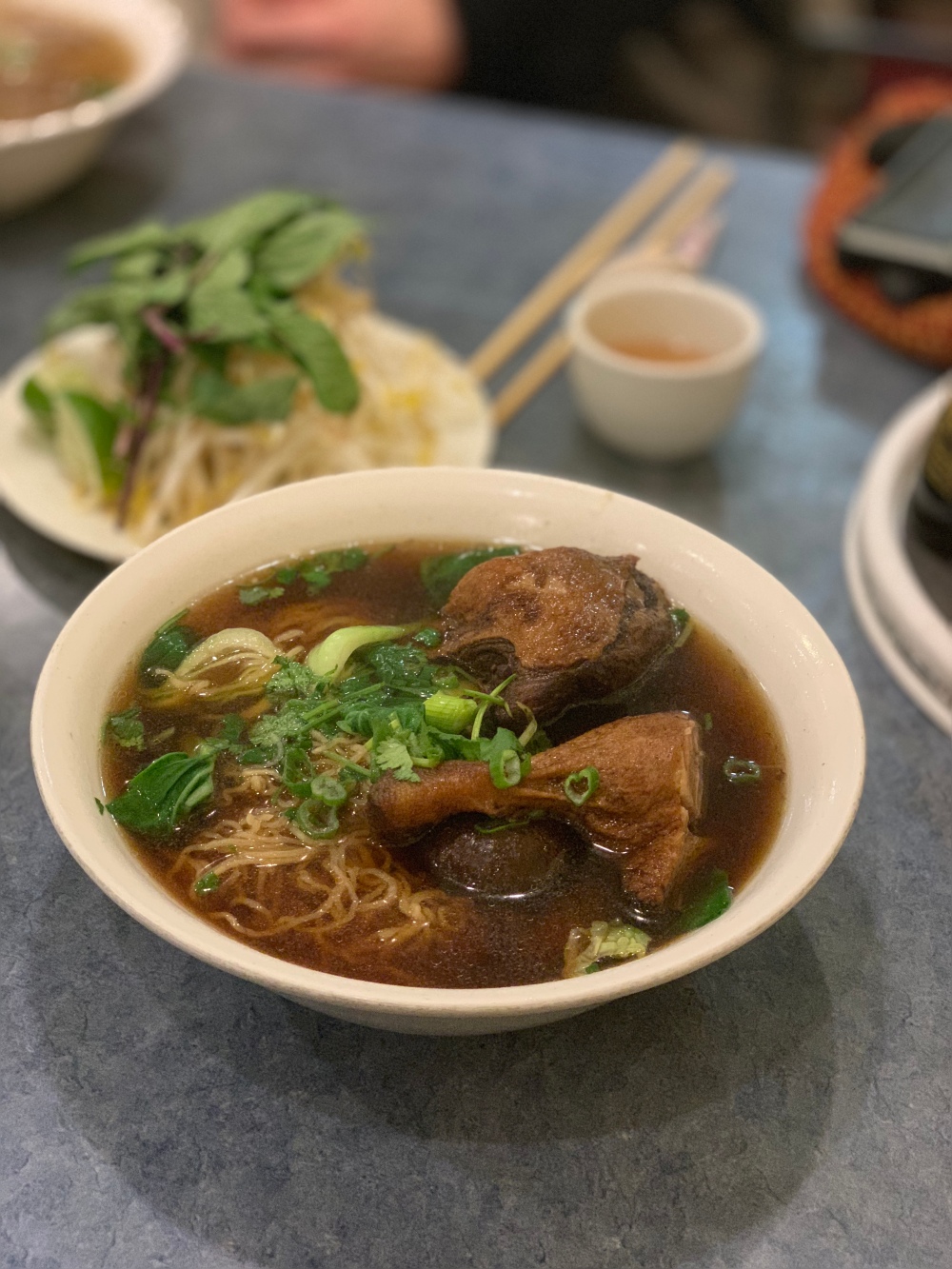 Eagerly, I tried the broth…

It was UNREAL! It literally tasted as though the duck had been cooked in it for many hours – that crispy taste you get only from a well fried duck skin was exactly what the broth tasted like.

Each scoop of my spoon tasted as though I was swimming in a bowl of crispy duck skin that danced across my mouth. It was a light broth, but the flavor was so bold that I found myself wishing I could take a gallon home just to drink, because it was THAT good.

Quickly I held my spoon out to my husband, he tried it and instantly dropped his mouth open in shock.

This broth was magical, and I don’t believe I’ve ever tasted anything like it in my life. It was a broth I would have forced my husband to try if he had refused my offer, because I would have been devastated for him to not try something so wonderful, so different, and so flavorful beyond belief; I can’t stress enough how delicious the crispy duck taste was with every mouthful.

Next, I picked up a shiitake mushroom and took a bite. I wasn’t very keen on their rubbery texture which took some biting to get through, but I didn’t let it get me down as I picked up my first duck leg.

When people use the term ‘falling off of the bone’ I think that sometimes they’re exaggerating.

This duck literally slid right off of the bone, and shredded itself with a tiny touch of my spoon – I was practically drooling to get my hands on a bite.

The first taste had me slouching into my seat in happiness. It was everything I could have ever wanted and more; the most perfect crispy fried duck legs that I could happily eat for the rest of my life if I had to; they where glorious.

I also loved the bok choy added into the soup, and noticed that it gave a refreshing, flavor enhancing, quality to the palette that I had never experienced with bok choy before.

The egg noodles made their way to my mouth next and that beautiful eggy flavor mixed in with the tender juicy duck meat, crispy duck skin, and crispy duck broth was like a flavor explosion.

I can 100% say that the noodles where still cooking in the scolding broth whilst I was eating the other ingredients, and by the time I got to them they had expanded and became never ending noodles.

I chowed down on mouthful after mouthful, mixing in pieces of duck meat and spoonfuls of broth, and yet the noodles seemed to just never disappear as though they where accumulating within the bowl by the second.

If this was what heaven would be like then I’d take it. This bowl of duck and egg noodle soup was the most magical and satisfying dish to eat on a snowy day, and I thanked myself for moving away from my original pho and trying something new.

Today was a good day.

By the time I finished the bowl I could hardly move, having to leave a little broth behind, but I had zero regrets.

I’d also like to point out that New Dong Khanh has delicious smoothies, juices, and teas to choose from.

At the beginning of our visit we where greeted with fresh hot green tea which was a godsend after our walk in the cold, and later I would buy a mango green tea that was so good I drank the whole pint in two long sucks of the straw.

This was a happy place.

My husband told me that his pho was perfectly cooked and just like many good bowls of pho tai he had received many times before.

New Dong Khanh had won over our hearts, and we would find ourselves longing to get back for more delicious soup.

I can honestly say that this duck and egg noodle soup blew my mind; I’d never had anything like it! It was as though this bowl had been made just for me, with all of my favorite ingredients, and from here on out I will search for it everywhere I go.

Thank you New Dong Khanh for a delicious feast that left us stuffed but wanting more.