This week temperatures in Chicago Illinois dropped to all time lows, but that didn’t stop us from celebrating restaurant week by visiting as many ramen joints in the city as we possibly could during our free time.

Now, when you see the words restaurant week you will automatically believe that the event lasts 7 days total. However, restaurant week actually spans out over 14 days here in Chicago, from January 25th to February 7th, with a lot of restaurants giving out tasting menus and special deals for the duration.

In total I believe there are almost 400 participating restaurants, and the event only happens annually.

With that being said I wanted to spend my time celebrating the ramen restaurants of the city, and although they maybe where not on the list of restaurant week participants, I still wanted to follow my heart and make my own week of fun.

Our first stop was Strings Ramen on our very first day in the windy city, which wasn’t so windy today but freezing cold.

Located in the heart of Chicago’s Chinatown on South Archer avenue, this is just one of two locations in the city; the other location being on West Belmont Avenue.

A few days before my adventures I had posted a shoutout on my Instagram ‘A Hangry Wife’ to get recommendations from ramen lovers in Chicago who knew all the best spots, and this is where we first started our journey.

The inside of Strings was pretty minimalistic.

The tables where lined up almost like a canteen on the left, with a nice little high top nook right by the entrance.

I loved the color of the paper light shades that had been picked to match the restaurants logo no doubt, and the very open ‘my home is your home’ feeling of the entire shop. Not only where the tables roomy with a lot of space, but the kitchen was open planned so that you could see right into the depths of ramen heaven and flaming grills; a reassurance that there was nothing to be hidden here at Strings, just great ramen and open arms.

The menu is laid out simply for you to choose what you need without any added jargon to the mix.

My menu was slightly cracked and it seemed impossible to get a picture that could show all of the content, but here is the identical website menu so you can get a better picture. I’m sure the menu has seen a lot of hands, and I’m confident that’s because of the delicious ramen within these walls, which means I’m glad the menu was slightly cracked! 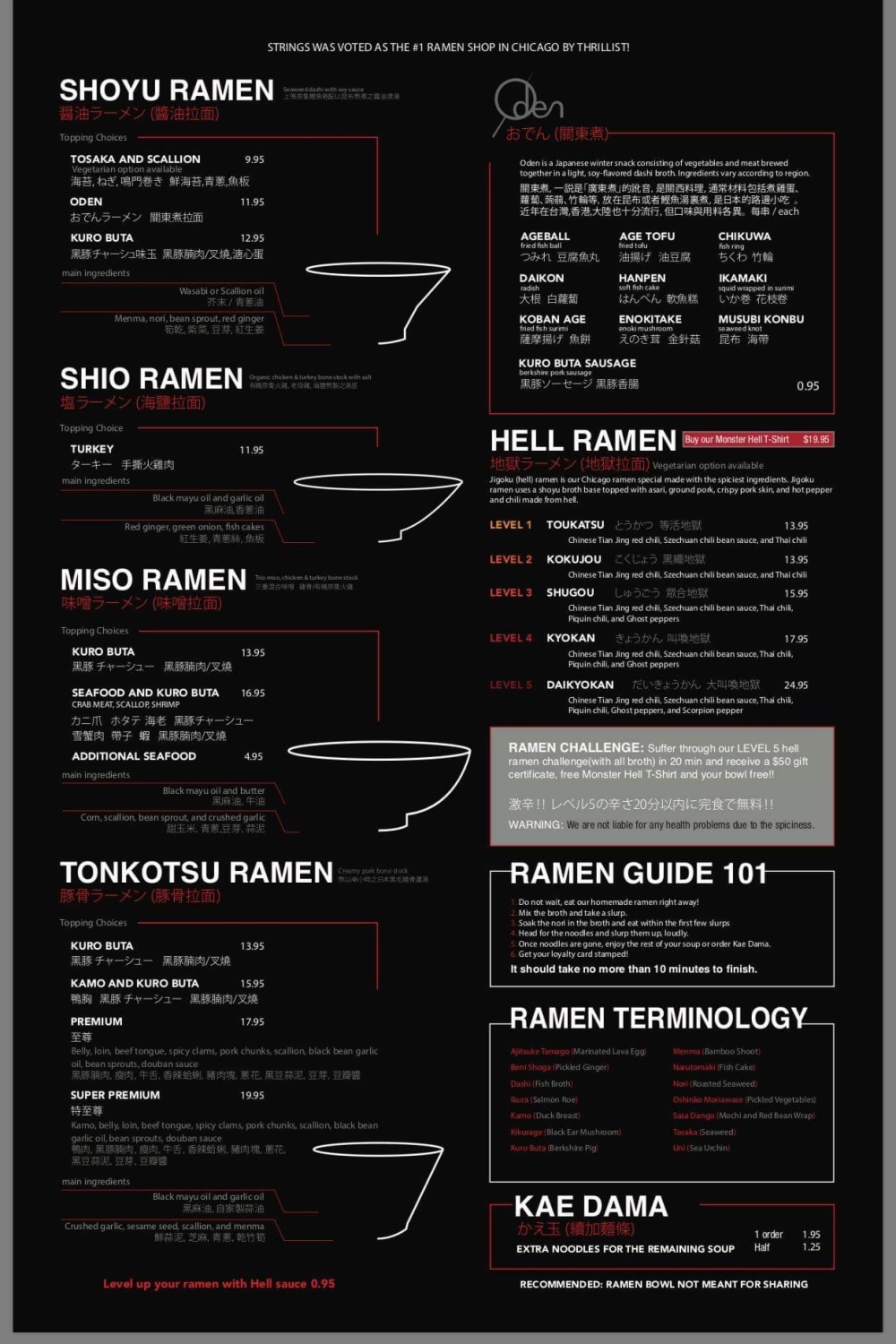 I’m sure at first you’ll read the bowls under each ramen section with slight confusion, but if you look to the right of the menu you’ll see a handy terminology to help guide you.

I enjoyed looking over the terminology immensely, and loved how it seemed to add an almost hands on, interactive, approach to the dining which only fueled the excitement.

You’ll notice there’s also a section for Hell ramen; a ramen I was too afraid to go near, and my favorite part about the whole thing is the small print included – it reads ‘WARNING: we are not liable for any health problems due to the spiciness’ and that alone tells you just how intense this challenge could be.

However, if you feel as though you can handle a level 5 bowl of Hell ramen in under 20 minutes then you’ll receive your bowl for free, a $50 gift card, and a free Monster hell ramen t-shirt! Sounds pretty good to me.

For purposes of my reviews throughout the week I stuck with the Tonkotsu which had added duck breast to the Chashu pork so that I could find my favorite, or a mix of many favorites, for different reasons. (Tonkotsu would be the dish I purchased at each restaurant, or as close to a Tonkotsu as I could).

I would like to point out that their menu also had choices of gyoza, donburi, soba, appetizers, a kids menu, and sunomono.

Another plus for the restaurant is that it’s BYOB, so you can pick your drink of choice to take along.

With my Kamo (duck breast) and Kura Buta (Berkshire pig) Tonkotsu ramen I ordered an extra Ajitsuke Tamago (marinated lava egg) because we all know I’m simply wild for a good ramen egg.

The extra egg came before the bowl of ramen, and it took every ounce of my being to not pick it up and destroy the whole thing at once.

It sat, lonely awaiting company, and I didn’t realize I had been staring at it in a trance until I heard my husband repeat my name for a second time, snapping me back to the present world.

As our conversation continued I struggled to keep my eyes from glancing over at the Ajitsuke Tamago which I could hear calling my name from its glassy cage, and deep down my husband knew that he had lost me to the world of foodie lust, and no good conversation would surface until I’d tried that marinated lava egg and fulfilled my needs.

As I slowly edged the glass bowl closer and closer, ready to lean in for a bite, our ramen arrived in perfect timing.

The bowl seemed narrow, but I can assure you right away that it was deceivingly big, and I would struggle to finish towards the end.

My husband ordered the Tonkotsu Kuro Buta (Berkshire pig) with extra noodles and decided to skip the duck breast addition.

In all honesty we where almost tempted to order the Premium Tonkotsu after reading that it came with Pork belly and loin, beef tongue, spicy clams, pork chunks, scallions, black bean garlic oil, beansprouts, and douban sauce (chili bean sauce) but to put it simply that seemed like too many eggs in one basket for the early brunch hours of this particular day.

Soon we’d realize that our choice of ramen was exactly perfect for our wants and needs.

My first bite was dedicated to the egg, of course, and in all honesty it tasted just like a boiled egg.

Quickly I picked up the extra egg and tried that too, the second one had more flavors to it as though a marinade had taken place, but I was still in desperate need of more flavor although I enjoyed it immensely due to the fact that I’m such an eggy loving gal.

Up next was the pork. It was a win. Each bite of pork was tender, juicy, and nicely seared. I did envy my husband for having many more slices, but I knew that I’d given up some of my real estate for duck breast and decided to not let it get to me.

With my one piece of thick Berkshire pig down the hatch, leaving its delicious remnants in my mouth, I picked up my first piece of duck breast.

It was cooked nicely, the slight tinge of red gave off a great medium rare cooked breast look, that tasted equally as good in its beautifully salty way.

If I had to make one improvement for the duck breast I would say that the fat was a little too soft for me, which made it chewy textured, I would instead have loved to bite into a piece of duck fat that had been seared and rendered into a crispy piece of pure joy followed by succulent duck meat.

I’d also like to say that the combination of the beautifully seared pork with a possibly crispy seared duck fat would have come together to complement each other’s flavors immensely. Both salty, both tender, and both locking in flavors that can only be achieved through a great sear to lock them in.

With that being said it wasn’t bad at all, and I ate all of the pork and duck breast so quickly that any onlooker would believe my bowl was about to be stolen from the table.

After the meat I quickly ate my way through the Menma (bamboo shoots), and Kikurage (black ear mushroom).

The texture of the Kikurage was almost gelatin-ish but a firm version, and the taste was very mild and almost neutral out of the dish, but mixed with the broth it seemed to take on the same flavor as though a vessel for any taste it where to be consumed with. In other ramen bowls I’d received the Kikurage shredded, or called a variation of names from Jews ear, wood ear, or jelly ear. It’s a pretty common addition to most as a fixing.

Next came the broth.

I read online that their broth is cooked for 48 hours and I can tell you now that it DEFINITELY shows.

The broth was so rich, so flavorful, and so expertly executed that it felt as though velvet was passing over your tastebuds in a heavenly landslide.

The creaminess seemed to leave a coating of meaty pork residue on the inside of your mouth after every sip, and the thickness was just the perfect amount before I would have maybe chose to slightly water it down had it been any more.

They hit the broth nail on the head. My husband and I both agreed that this was the kind of broth we look for when hunting for a great Tonkotsu on our travels.

Next came the noodles. They where a little too al dente for my liking, but after sitting in the steaming broth for a while they cooked to perfection, and I slurped them up as though breathing was no longer necessary.

The noodles are made in house, fresh, every day and it shows in the taste and quality.

Most the of qualms I had with the dish where minimal and easily fixed, and the broth blew my mind with its complexity and taste.

Day one of our ramen hunt had been successful, and we looked forward to many more shops in the coming week.

Thank you to Strings ramen for welcoming us in out of the cold polar vortex, and into your ramen loving arms.

Tune in again to read more ramen reviews in the coming week to celebrate Chicago’s restaurant week, and don’t miss my finale post in just over 10 days which will speak of each ramen joint in one article.