For most during this first cold, and frigid, month of 2019 it’s hard to walk anywhere without a hat, gloves, and layers of clothing.

I can assure you that Cleveland Ohio is no exception, and we find ourselves freezing with you in shaky unison.

However, no matter how cold it gets, or how awful that icy wind attacks our faces with prickly needles of pain, we will never be forced to stay indoors when there’s good food and good beers to be had.

We will not, and we simply cannot; because food is life, and what is a life without all of these delicious delights to entice and lure us in.

It was 3 degrees Fahrenheit and I stood in our hotel room with 4 layers on my torso, a buff polar scarf pulled up over my wool hat (showing only my eyes), 2 thermal pants and a pair of jeans with ski socks, my winter jacket, and hiking boots.

I was staring at my husband, sweating profusely in the hotel heat wearing enough layers to take on the icy tundra, and as I started making angry gremlin noises my husband realized he should probably hurry up to avoid A Hangry Wife.

We where out the door momentarily, and on our way to Souther Tier brewing.

You’ll notice my first picture is usually the front of the building, but with the crazy snow storm happening outside I decided to quickly get into the warmth and skip that step.

My first drink was their lakeshore fog New England Ipa, which I instantly fell in love with and would order every time following.

The menu was full of all kinds of delicious food from sandwiches, burgers, sharing plates, salads, pizza, desserts, and entrees that ranged from steak, to mahi, to Perogis, and chicken and waffles.

Without batting an eyelid my husband and I both decided we’d go for the peppercorn crusted steak.

Whilst taking the first sip of our second beers, our food arrived and oh boy did it look good.

I wasn’t so keen on the seasonal veggies being broccoli, but I didn’t mind it either.

My husband was the first to cut into his steak, and just from the look on his face as he gasped in shock, I knew it was going to be good.

Usually when I order steak at a restaurant it’s along the lines of a fillet mignon, so when I saw sirloin fillet on the menu it didn’t really strike any special feelings. Let me tell you that after having this sirloin fillet at Southern Tier my opinion on the cheaper cut has been blown out of the water, and if I ever see it on a menu I shall order it without a doubt in my mind.

It was almost as good a fillet mignon, and at only $16 for the whole plate you felt as though you’d won the jackpot. The quality and taste was beyond anything I’d ever imagined.

The potatoes tasted as though they’d been roasted in animal fat, and where crunchy and soft all at once. (Just like my Mum makes)

But the star of the dish was definitely the steak, it was tender and succulent; cooked to a perfect medium rare, which melted so beautifully in your mouth.

If I had lost my knife and replaced it with a spoon I’m sure this steak would still be easily cut.

The outside was seared beautifully, holding in all of the yummy flavors, and it made the softness of the inside seem even more perfect with the added crunch.

My husband and I both agreed that we where shocked by just how happy we where with the sirloin, and the peppercorn crust gave it an impeccable taste and was seasoned so beautifully, that it complimented the meatiness of the dish.

There’s no other way for me to tell you just how good this steak was without telling you that it stole our hearts so much that I’d like to note our second trip to the brewery was decided from this one dish alone, and our need to have more of that mouth watering steak.

The second time I would get the same dish, but this time I’d choose a side salad instead of broccoli, and once again it stole my heart.

The meal arrived quickly once more; the potatoes where so good I couldn’t stop eating them, the side salad was light enough to pair with both the steak and potatoes, and the steak was once again cooked beyond belief that had my husband and I in sheer bliss. 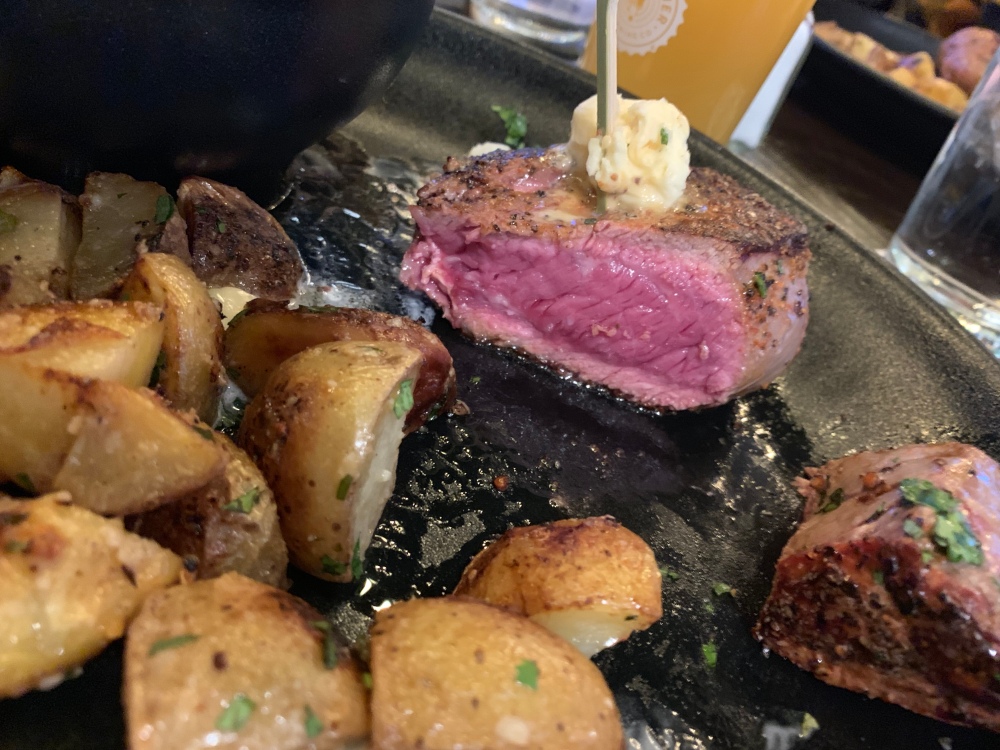 As you can see from the picture above, this dish really was no joke, and I really do believe that it’s almost just as good as a fillet mignon thanks to the expert cooking methods of the Southern Tier chefs.

The garlic butter on top of the steak flooded down over the sides and carved a river system through my potatoes which left me feeling weak at the knees.

I really don’t believe you can ever go wrong with some roasted potatoes, a good medium rare steak, and some hearty garlic butter.

As we finished our second steak meal in one week at Southern Tier brewing, our amazing waiter asked us if we would like dessert.

My husband and I shook our heads, full beyond belief, but as the waiter released the words ‘a flight of creme brûlée’ from his lips he didn’t even have chance to finish explaining the dish before my husband was agreeing to order it.

That was it, we where getting a creme brulee flight, and for the first time my stomach began to sweat at the thought of more food in its already overloaded space.

Before the waiter left to place our creme brûlée order, he asked us if we liked imperial pumpkin ale, my husband nodded to the question, and the waiter disappeared.

The waiter returned with a Crowler of Imperial pumpkin ale, telling us that it was on the house, as they where trying to get rid of their autumn beer, and instantly my mouth dropped open.

I couldn’t believe why anyone would give us a free Crowler, but we where extremely grateful and expressed our gratitude over and over again.

I felt so welcome, and cared for at Southern Tier, that it made me believe they where happy to have us there, and appreciated our custom.

You have to admit that it was a beautiful sight.

What a great idea! I loved the use of the beer flight, and the presentation involved. It made it fun, it made it exciting, and it made my mouth water as I grabbed a spoon to dig in.

The traditional creme brûlée was creamy and thick with a gorgeous vanilla flavoring that was extremely potent.

I next tried the caramel and after 1 second of it touching my tastes buds I said ‘woah’ out loud, causing myself to look around and see if anybody had heard me.

It tasted almost of a butterscotch I’d tried back in my childhood in Yorkshire, England.

The caramel tones where deep into this little glass, and the light fluffy texture made it appear almost like an airy pudding; I couldn’t stop.

Lastly I tried the chocolate creme brulee, and was astonished by just how rich the chocolate seemed to be. It was a bold dish that really made it feel as though you where eating a chocolate pudding, but yet felt as light as a feather and didn’t leave a lump in your stomach.

In the end I’m glad we ordered the creme brûlée too, because it really was a fantastic addition to an already fantastic meal. I also didn’t even need to be worried about becoming over-stuffed, because the dessert was so light that it felt as though it barely added any mass at all.

Between the steak, the potatoes, the amazing beer, and the creme brûlée, I’m happy to say that Southern Tier was one of the most enjoyable brew pubs I’ve had the pleasure of dining at.

With two trips down in just one week, I was so sad that we had to leave Cleveland and I couldn’t make a third trip.

If you find yourself in the area then I highly recommend their $16 peppercorn crusted steak; it will leave you speechless.

Thank you to Southern Tier for your incredible hospitality, amazing food, amazing beer, and an overall 10/10 dining experience.