If you’re looking for open arms, the best brunch in town, and some boozy mid day love, then look no further than Bud and Marilyn’s. 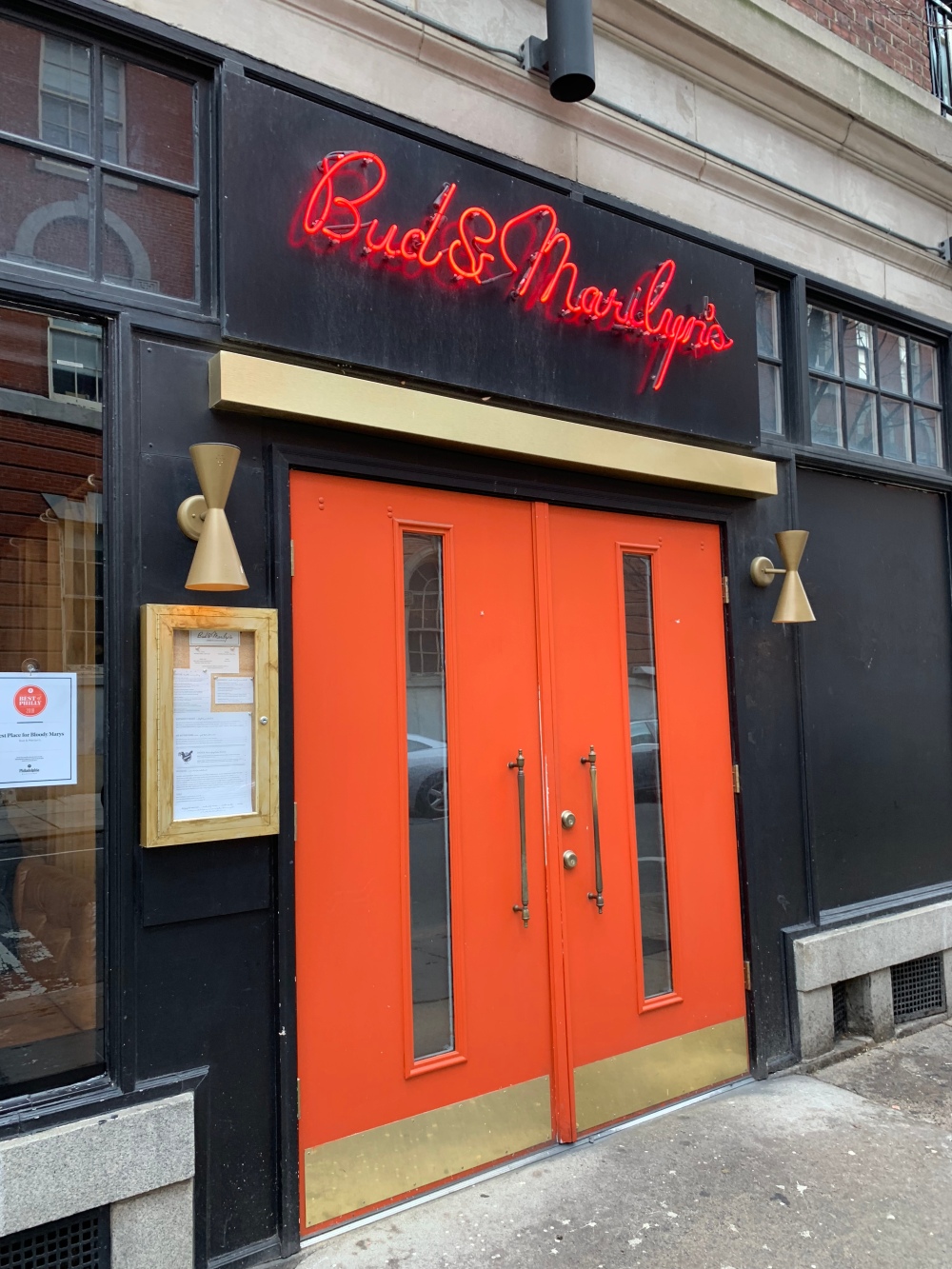 From the outside it gave away no clues, and the Bud and Marilyn’s sign drew an eager eye with its fancy font and intriguing lure; I had heard many good things from friends and family and today would be the day that I finally got a taste for myself.

Hand in hand my husband and I waited for the lights to change across the street.

I wondered what I would get on the menu, but laughed under my breath knowing that I’d already searched the menu online at least 10 times and had every idea of my dish.

It was brunch time and I was at the happy giggling phase of hanger – the stage before the shaking and tears – and I knew it was time to fill the void within with what I’d heard was some of the best brunch in town.

Inside the decor was elegant yet simple.

Two sides of the restaurant spread out before us, including a bar, and as we saw our friends in the distance we joined them at a table with leather seats; sitting around the halfway mark.

In great timing our brilliant waiter came over for a drinks order as soon as we’d said our Hellos, and settled down.

My husband went for a spicy Bloody Mary, and as I pondered a traditional mimosa our waiter suggested I try their fresh Grapefruit mimosa.

I sat, now distracted and unable to look at the menu, waiting for my drink to arrive as I chatted amongst the group.

It didn’t take long and the most beautiful, and large, mimosa touched down right in front of me.

I was in heaven. 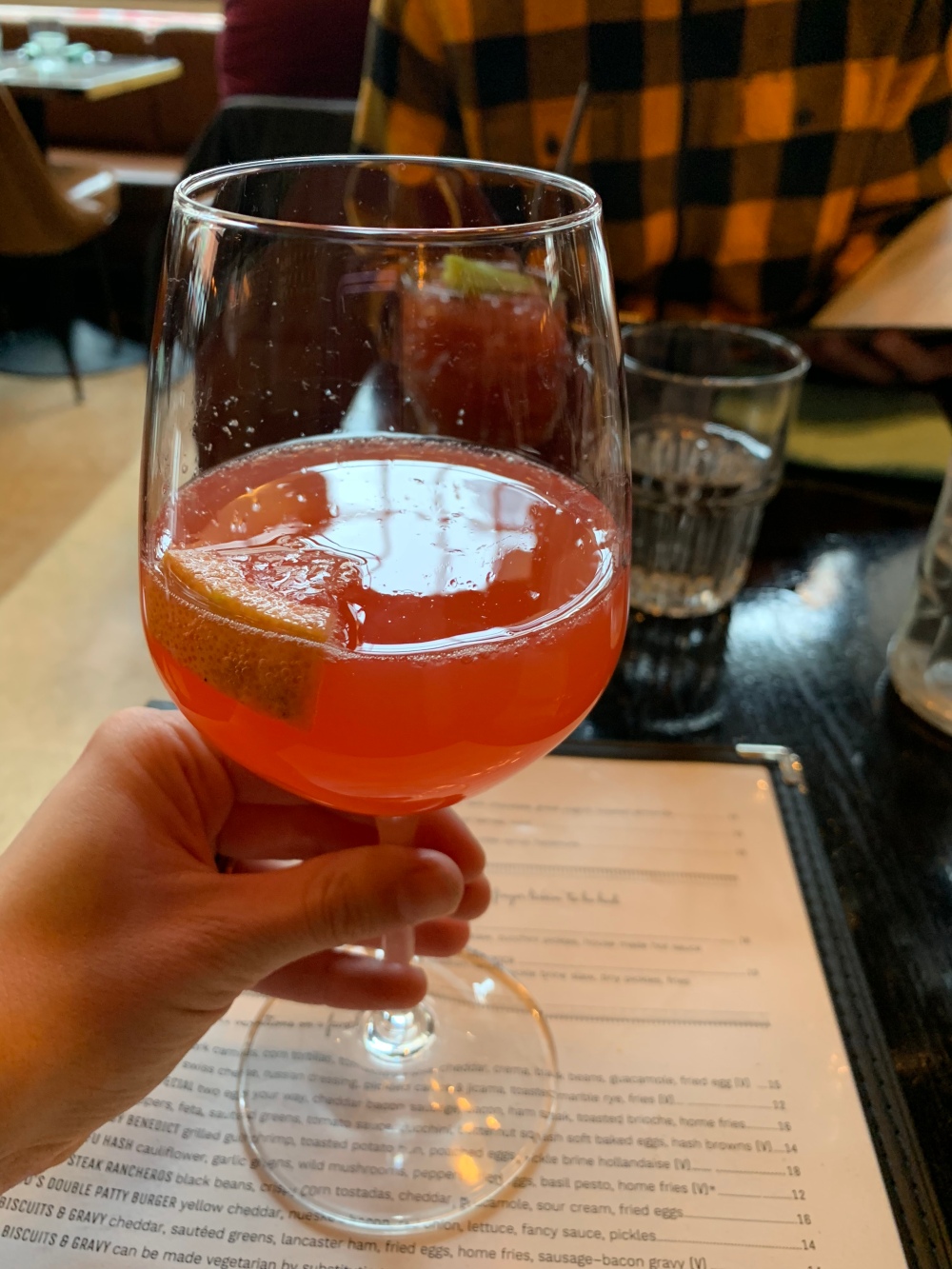 I have always been a fan of a good mimosa, but let me get this straight right here, and right now!

Orange juice mimosa is no longer on my radar. A fresh grapefruit mimosa is the only mimosa I’ll be craving for a very long time.

I could taste the freshness with every sip; the grapefruit danced across my palette as though I’d just spoon fed myself the remnants of liquid from an actual grapefruit after the fruit had gone, and the Prosecco gave it a kick that went so perfectly hand in hand I could have chugged the whole glass in a second if I’d let myself go wild.

This mimosa was no joke, and I felt the need to repeatedly let everyone at the table know of my love, and new found partner in crime, over and over again until I’m sure I sounded like a broken record.

With my spirits high, and a little giddy from taking a few hearty gulps on an empty stomach, I decided to pick my main.

After looking at the menu online multiple times I still struggled beyond belief as I scanned back and forth over and over again, going between all of the fantastic choices.

Here, take a look for yourself. 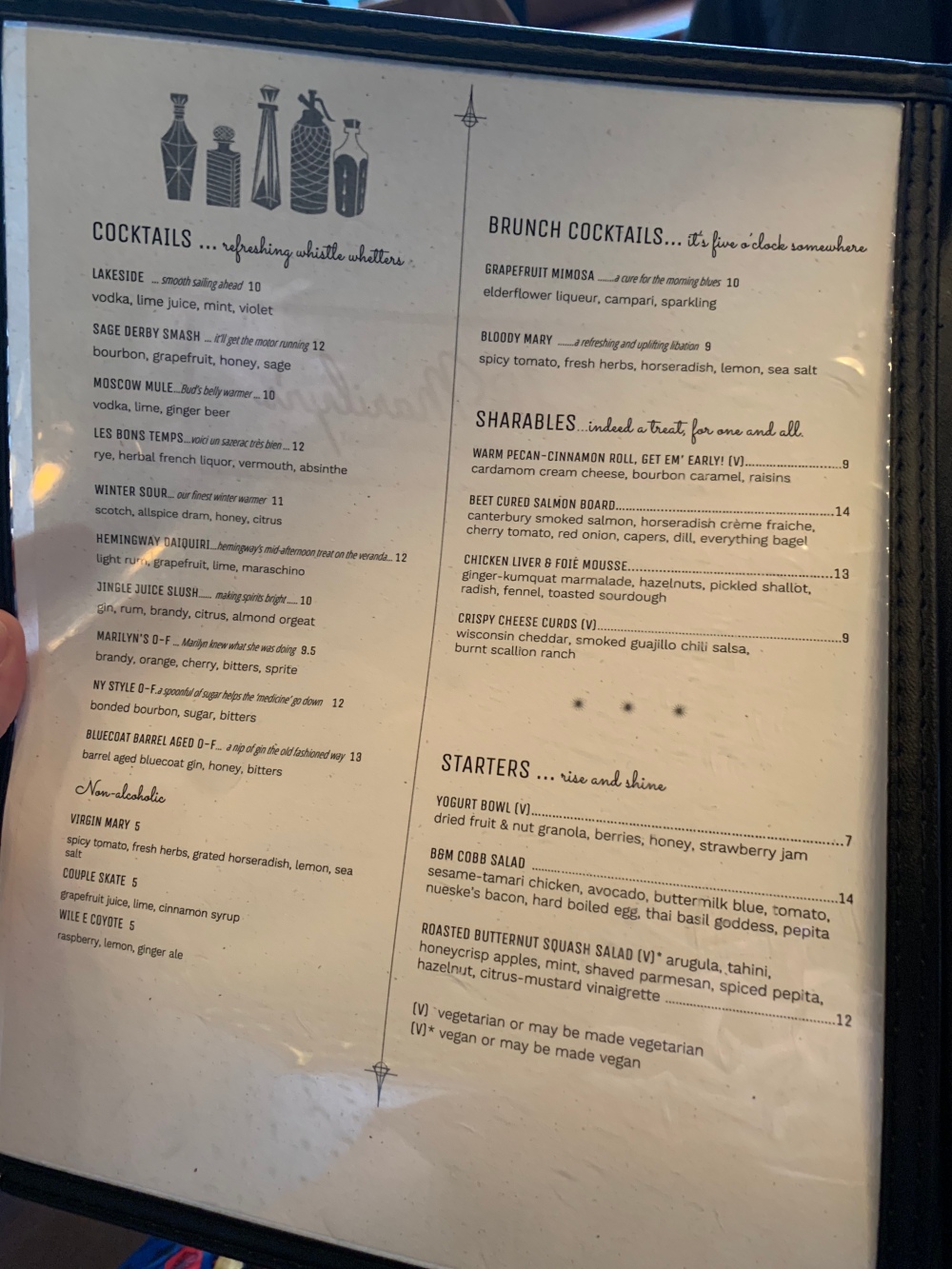 In the end, with the help from our waiter, I decided to go with the Chilaquiles verdes. A dish with pork carnitas, homemade tortilla chips, black beans, cheddar cheese, salsa, guacamole, and a fried egg to top it all off in glorious fashion.

Of course everybody who knows me knows that my love for eggs stretches far and wide, and that when brunch calls an egg is always a must.

My husband ordered the French toast, to my surprise, and I found myself getting excited for him at the thought of it.

But before I had the chance to think about all the ways in which I couldn’t wait to receive my meal, a plate of fried cheese curds landed on the table for us to share.

Now, I’m going to give you a fair warning and tell you to stop reading if you love fried cheese curds, because these where without a shadow of a doubt the best fried cheese curds I had had the pleasure of eating in years, and it may make you leave here with a lot of envy… and I’d hate for my lovely readers to turn green.

The curds where made with real Wisconsin cheddar, the red sauce was an incredibly delicious smoked guajillo chile salsa, accompanied with a burnt scallion ranch, and if I could have cried happy tears at that table I would have.

The batter on the cheese curds was so delicate, and soft, that each curd was a pillow in which my mouth could throw around to create a cheese curd pillow fight within. I tried both sauces, the burnt scallion ranch took normal ranch to the next level with its depth of flavor, and the salsa added a Smokey taste that left a tickle of sweetness on your tastebuds. I couldn’t stop, I was dipping curd after curd like a yo-yo, and it wasn’t until I stopped to watch my husband practically melt into his seat at the first bite, that I realized the batter also had a slight resemblance to a donut batter, only lighter and subtle.

Our friends around us laughed sweetly as they saw our love of cheese curds explode to new heights, and informed us that they too love them and sometimes visit Bud and Marilyn’s just to get their hands on them.

Oh how I wished right there and then that Bud and Marilyn’s was my neighborhood eatery, but more was yet to come.

Next up a cinnamon roll landed in front of us, and I stared at everyone around the table trying to figure out who had ordered it.

It turns out this jumbo sized cinnamon roll was sent from the kitchen for us to enjoy – as if I couldn’t already love this place enough.

Sat in its very own cast iron skillet it seemed almost too cute to eat, but as soon as the smell of cinnamon drifted towards me I felt I would possibly dribble on myself, at the table, at 26.

This cinnamon roll was made up of cardamom cream cheese, bourbon caramel, pecans, and a handful of yummy raisins, how could I ever resist?

Trying hard to remind myself that I had a whole meal coming, I took a small spoonful, eager to fill my face with this beauty of a creation.

As all of my fellow diners shared stories of their love for said cinnamon roll it didn’t take me long to make up my own mind.

The first bite was golden, and all the bites that ended up following that!

The texture was so squashy and doughy that I find it hard to recall a time, or a cinnamon roll, as textbook as this.

For someone who isn’t a big fan of a strong cinnamon taste, I was head over heels, and the added crunch of pecans, the sweet tang of raisins, and the finished blanket of the bourbon caramel and cardamom cream cheese made this cinnamon roll my new best friend.

In the end I had to stop myself with distraction, by finishing my first mimosa, and ordering a second one just to make sure I saved enough room for my main dish.

My husbands French toast was the next to arrive, and when I say my jaw fell wide open, I can assure you that I am not in the slightest over exaggerating.

This was not a dish of French toast, oh no, this was a door stop!

Never in my life had I see a caramelized apple French toast as big as this, and suddenly I found myself wondering if I’d made the wrong decision on my brunch.

The cinnamon mascarpone entwined within the toast along with hazelnuts, and the side of whiskey cider syrup was a sight to remember.

Later I would try a piece and confirm that the dish tasted just the way it looked – fabulous!

It was sweet, nutty, and had the perfect spongey consistency.

I would also later tell my husband that with the addition of the apples the whole dish reminded me almost of fall, and that I couldn’t stop looking at not only that glorious plate, but the color of his plaid shirt which matched so beautiful.

It was a constant back and forth of my eyes between my husband, and the French toast, for most of the time after that until my food too quickly arrived at the table. 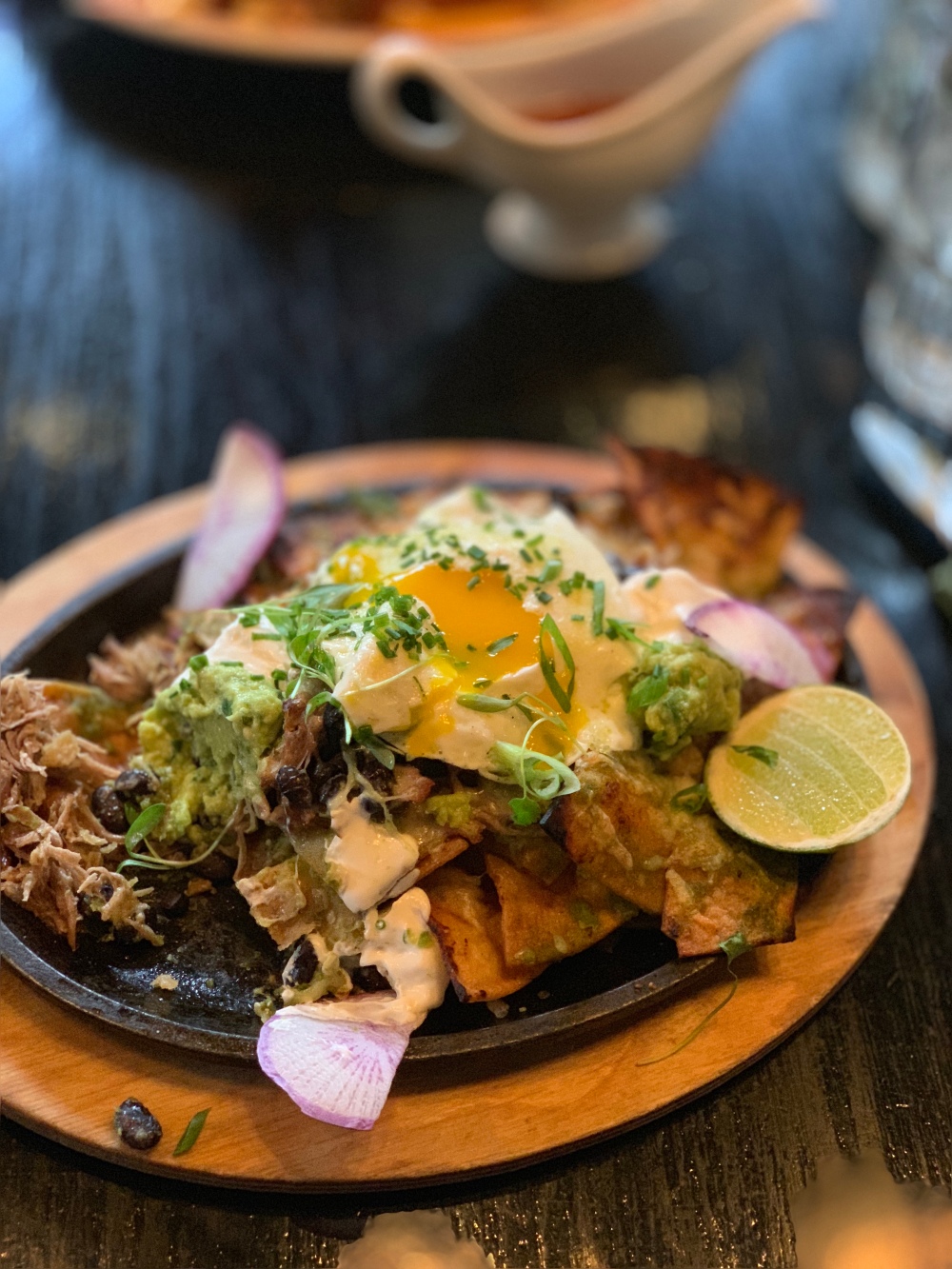 Stacks of hot tortilla chips – fresh from the oil – where blanketed with succulent pork carnitas, all the trimmings I’d been promised from the menu, and that sexy looking egg right on the top.

I didn’t know where to possibly start, but of course I found a way, and I knew right there and then that I did not regret my brunch decision.

All of the food we had received at the table was of an outstanding level in quality and taste, and I can assure you that this Chilaquiles verdes was right up there with the rest.

I had never heard of, or had, this dish before, but now it was on my radar for all future brunches to come without a doubt.

I loved the mix of a meal I’d usually order later in the day, with the egg, that brought it down to a perfect brunch level.

The tortilla chips where not soggy under the ingredient mountain, and packed a hearty crunch, and although many ingredients played a part to really fill your palette with an array of sensory explosions in the dish, not one single ingredient masked or reigned dominant over another.

It was as though each ingredient had been made and prepared in a way that created the perfect marriage for the dish they where serving, and as I shoveled cheesy succulent pork covered tortillas into my mouth with guac, salsa, beans, and a perfectly cooked over easy egg I had to sit and thank the food gods for a brunch I will not be forgetting any time soon.

Upon hearing so many fantastic things about Bud and Marilyn’s on Locust street Philly, I would like to say that it surpassed any of my original thoughts and left me feeling nothing but love for the magic within these walls.

After hearing the story of Blaine (Bud) and Marilyn in Wisconsin, operating ‘The Spot’ restaurant, and how this very restaurant came to be, I think their granddaughter and co owner have proved that this restaurant is indeed a homage to the original Bud and Marilyn, and I know that if this was my local there’s no other place I’d rather be.

A fantastic restaurant that Philly has the honor of calling ‘its own’.

Thank you so much for impeccable friendly service, food delicious beyond belief, and a new home away from home in Philadelphia.

Bud and Marilyn’s, we will be back!