This evening my husband and I took a train from Newark NJ to NYC in order to find the giant soupy dumpling we had only ever heard stories about.

Standing outside of Drunken Dumpling on 1st Avenue, I looked up at its wooden sign, seeing no giveaway of the secrets within its walls.

Holding my phone up with a picture I’d found on the web, I compared the restaurant front; this was definitely the place.

A rumbling came from down below, deep in my boots, and I could sense an excitement bubbling in the pit of my stomach with every step I took closer to the threshold.

With a pull I failed to open the door, and then awkwardly pushed my way inside.

It was small, and quaint in the most minimalistic way.

All around us sat small tables and chairs; the restaurant was quiet in the late afternoon, and I felt myself being very grateful for it.

I was grateful for two things: 1. We could pick any seat in the house, and 2. Nobody would see me try and eat a ginormous dumpling like a complete savage apart from my husband. Phew!

I could hear my cowboy boots clip clopping on the wooden floor with every step; each tread echoed throughout the small space, and the waiter at the register never faltered his smile.

We were greeted with warmth, and asked if we had visited the restaurant before.

Upon discovering we had not the waiter explained the process of the large dumpling and how it would take twenty minutes total to cook, and how they only sell maximum 25 a day; so if we would like one then we should put in an order to start as they had one left.

My eyes fluttered away to the menu as he was talking and I found myself in a tug of war battle between the elusive XL soupy dumpling and the six small soupy dumplings.

It wasn’t that I had suddenly decided I no longer wanted the XL beast, but that I was almost intimidated by it; pork, shrimp, crab and vegetables all took refuge inside this little doughy home, and I questioned my love for seafood in a dumpling more than ever.

I turned to my husband, and asked for his opinion, to which he replied ‘we may only be here once’.

It was a done deal.

However, I realized that I simply could not wait twenty minutes for something to eat, so I also ordered a plate of six normal pork soupy dumplings.

My husband did the same, but instead of the XL he snagged three pork buns for the taking.

We were set; all we needed now was some nice cold beer to go with the feast. 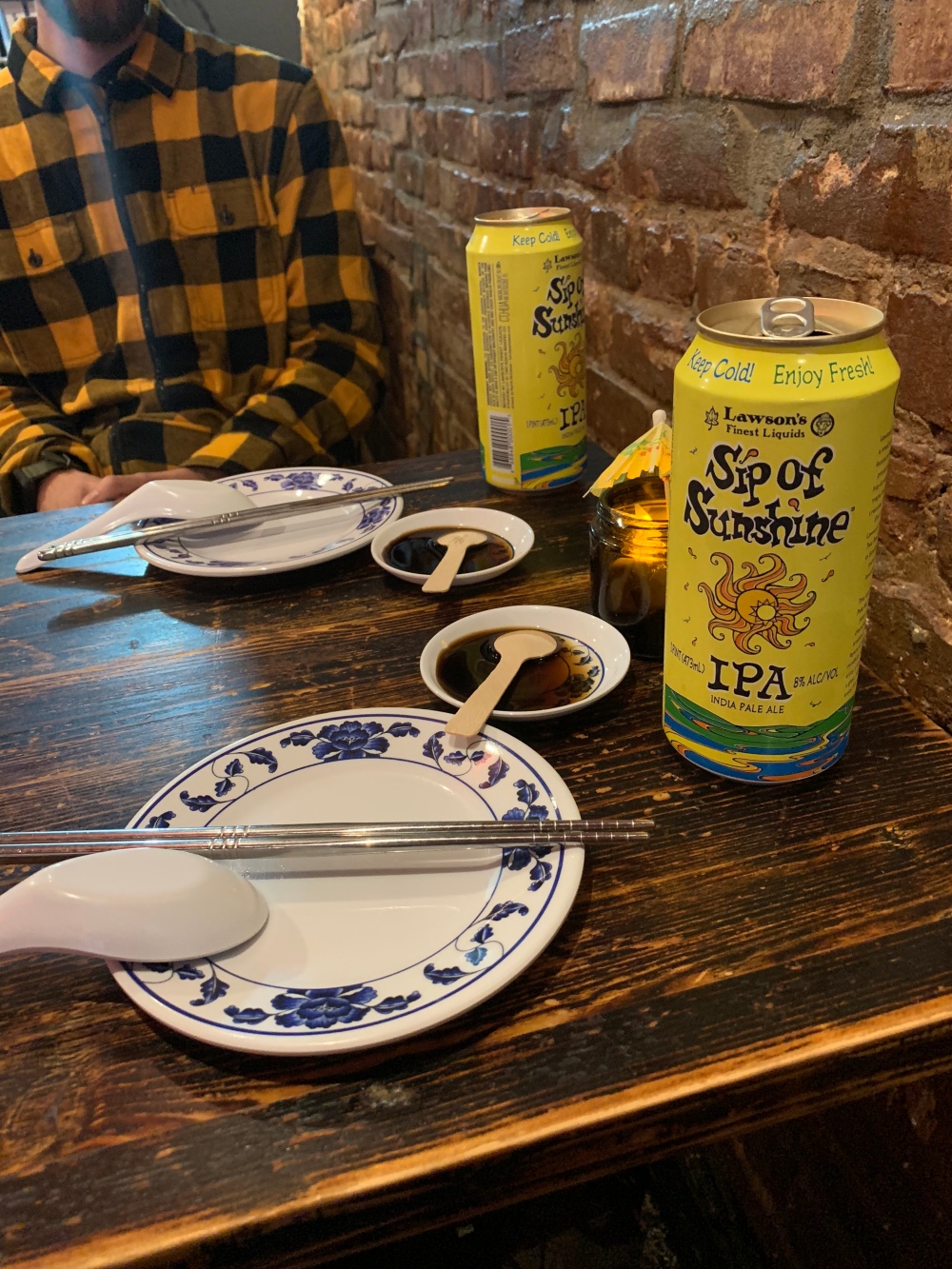 With IPAs in hand, and good IPAs I may add, we chose a table close to the counter.

I kept sitting as high as I possibly could in my chair, hoping to maybe get a sneak preview of that little beast I’d soon call ‘mine’.

It wasn’t long before the six traditional soupy pork dumplings where steaming their way towards us across the restaurant like little steam trains. 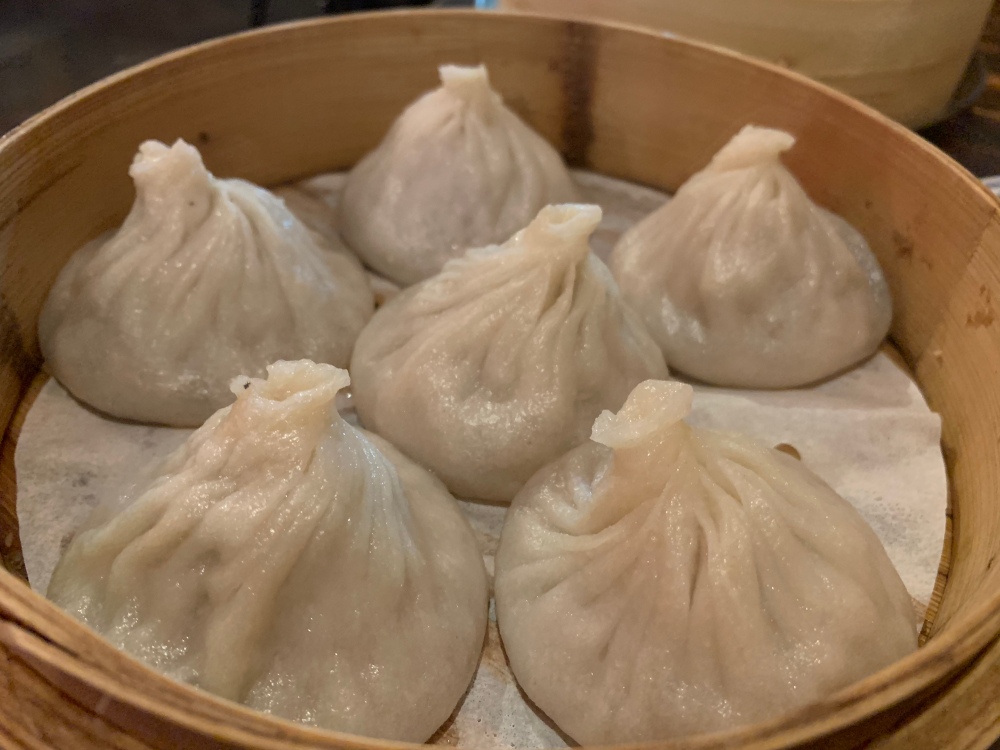 Our waiter, the same guy that also took our order at the counter, was extremely knowledgeable on the art of soupy dumpling eating.

He gave us many tricks and tips to make sure we didn’t scold our mouths (we’ve all been there) and I really appreciated the effort he put in to really making our whole experience a good one.

We also got a little tray of vinegar to accompany our dumplings, which our waiter assured us would be a good idea.

In the end, after a trickle of vinegar, I decided to poke a small hole into the top of each dumpling, in order to release some steam.

As my husband and I drank mouthfuls of beer and laughed about previous soupy dumpling trips that had left us covered in soup, I watched in admiration as my little dumplings steamed away like teepees, on a cold winter night, down in their bamboo basket.

After around five minutes I pressed my finger to the side of the dumpling, my husband matching me like a mirror, and we both nodded; it was time to try the first little bundle of joy.

With my spoon in one hand and my chopsticks in the other I pushed the whole dumpling into my mouth.

Immediately my eyes grew wide; the dumpling was so big I couldn’t fit the whole thing in at once!

Realizing I had to commit I began squashing it in, only to make it worse because now I couldn’t chew; my husband stared at me with his mouth hanging open (probably thinking wow, that’s my wife) as I tried desperately not to burst out laughing, sending scolding hot dumpling across the table.

Tears where rolling from my eyes as the need to chew and the urge to laugh overcame me; it felt like a lifetime of chewing and an awful lot of sucking to try and not let any of the juice fall out.

Finally I was able to finish the dumpling, and I burst out laughing so hard that my husband began to laugh again too; he knows me well.

‘I won’t be doing that again’ I heaved out between laughs.

My husband shook his head with a smirk, but later I’d notice him across the table breaking down his dumpling into sections, and not stuffing a whole one into his mouth.

Let me go into a little more detail about these heavenly soupy dumplings; the delicious soup inside was so flavorful and almost like a Tonkotsu-esk broth that I destroyed them easily one by one.

The pork was so tender, and almost along the lines of a pork gyoza filling, that it paired perfectly well with the fresh, soft, dough that I truly believe we discover little parcels of heaven.

Within what felt like seconds both my husband, and I, had polished off six dumplings each with ease.

As the trays ascended away from our table, and made their way back to the kitchen depths, I could see the waiter carrying a tray with both hands.

Could this be it?

Was my giant soupy dumpling finally coming for me?

My eyes lit up as though I was watching a display of glorious fireworks; my smile stretched a mile wide, and almost child-like I held my hands up to my cheeks in excitement.

I couldn’t believe it; every single word about this dumpling had been true.

It was bigger than my head, and I know the old saying goes ‘you shouldn’t eat anything bigger than your head’ but I find myself frequenlty breaking those rules.

I mean, this thing was so big that it was impossible to eat with chopsticks alone. Instead, I was given a straw to suck all of the soup out with, before tackling the insides.

It was such a fun, interactive, feast; I’ll forever be a little bit sad in the future when I receive my dumplings without a straw.

I sat, for what felt like a painfully long time, staring – no, not staring, longingly looking – at the dumpling; I wanted to try everything immediately.

Finally, I decided to take the first sip…. NOPE!

The soupy goodness inside resembled molten lava, and I decided to take the waiters advice and pop a few holes into the top.

It worked, and soon this gazebo of love would be deflating by the second.

The soup had a different richness to it this time, and I noted a fish taste as I slurped and sipped away; it was good.

Too good, but almost a milder version of the small guys just because of its sheer size.

Finally after what felt like a whole gallon of liquid, I was sure I could pop the top and dig inside for that protein ladened treasure chest within.

It was an effort to break the thick dumpling skin; the sheer size of it meant that, compared to the smaller dumplings, the dough was significantly thicker this time on the top.

Upon opening the dumpling I was far too excited to get a bite of that yummy inside, and do a taste test for myself, that I didn’t get a picture beforehand.

I was surprised just how much I loved the mixture of pork, shrimp, and crab filling.

I feel as though the added seafood really gave it a sweeter taste that seemed almost delicate, and I found myself just destroying the protein until I couldn’t eat anymore of it.

In the end I almost finished the dumpling that I presumed weighed as much as a newborn baby, and I regretted not a single thing.

If my husband had to roll me home then so be it; I would gladly accept my defeat.

As I was happily destroying my extra large dumpling my husband was busy destroying his pork buns, which I also got a taste of; they tasted similar to the first soupy dumplings only minus the soup and a thicker dough that was nicely charred on the bottom, adding a whole new depth of flavor.

If you find yourself in NYC I suggest you head towards the East village and go to the Drunken Dumpling; it will leave you drunkenly full.

Thank you so much to everyone who made this experience great; including our waiter who went above and beyond.

You made this Hangry Wife a happy Wife.